Demonetisation is a move that was done by the Indian government and has been implemented since November 8th 2016. It means, all the currency in our country will be replaced with new ones without any warning or previous notice. The aim of demonetisation had been to curb terrorism, counterfeit money and black money but it has faced many criticisms from people who believe this move would not have much effect on these problems.

The “what is demonetization” is a question that has been asked by many people. This essay will answer the question in easy words. 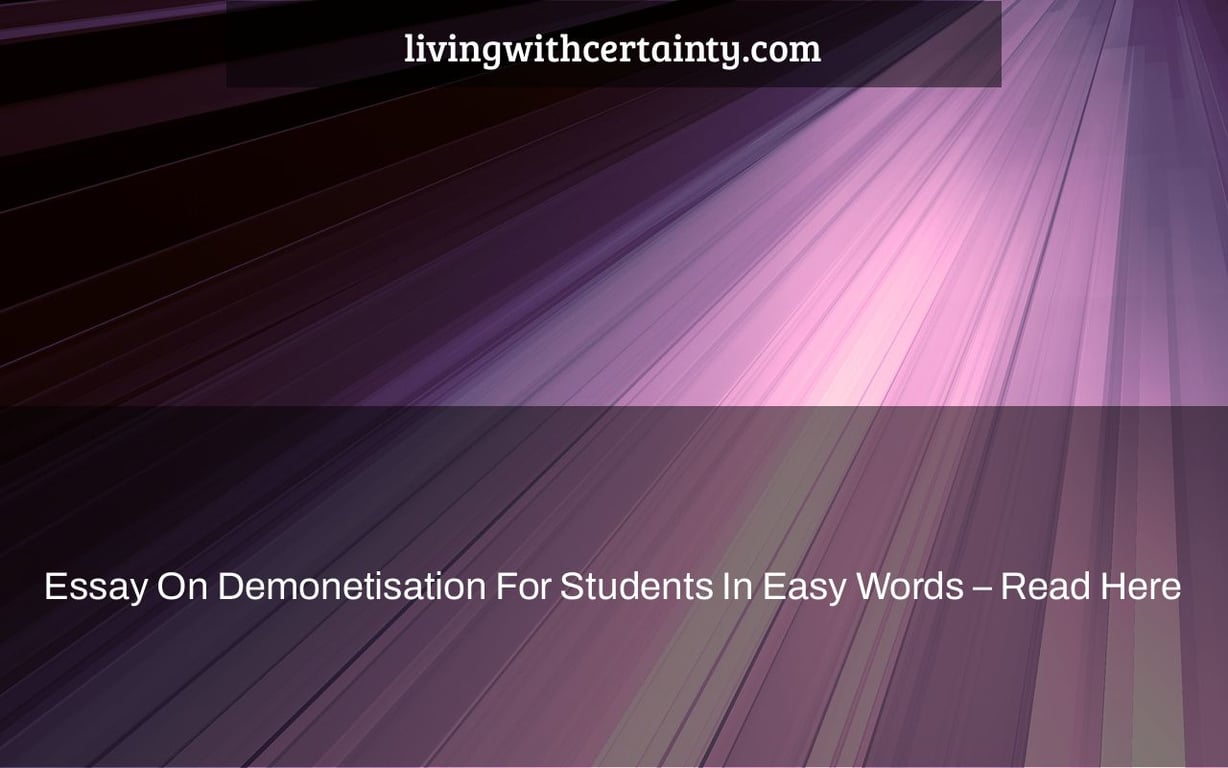 Our honorable Prime Minister, Mr. Narendra Modi, surprised everyone by implementing demonetisation. The term notebandi (a Hindi word) is on everyone’s lips. Everyone has experienced some kind of difficulty as a result of the demonetization, yet despite this, many were pleased with the prime minister’s choice.

Demonetization has happened twice in the history of the Indian economy. The first demonetization took place in 1946, under the Pandit Nehru administration. The purpose of the demonetization was to punish individuals who made a lot of money by supporting the Allies during World War 2.

In 1978, the second demonetization took place. It was during this period that the Bhartiya Janta Party (BJP) ruled the country. The 1000, 5000, and 10,000 rupee notes were all demonetized.

The sole purpose for the demonetization was to combat tax evasion via black money.

The new series of the currency has the signature of Urjit Patel, so with this, we can conclude that the decision of demonetization was not to come into consideration in a single day, but it was pre-planned. It is quite simple to understand that the process is lengthy. The procedure includes the printing of new notes. The transition of ATM. The method of demonetization would have started at least 6 to 8 month before. In the early of January or February of 2016.

The governor of the Reserve Bank of India, Raghuram Rajan, was a vocal opponent of demonetization. The procedure was begun without Rajan’s awareness in the first step.

There was a serious cash shortage, as just 1.36 lakh crore rupees were released on November 18th,16 resulting in lengthy lines outside every bank.

Only those who were directly engaged in the demonetization process were aware of the reality, despite the fact that the prospect of demonetization was stated by the head of the State Bank of India in April 2016.

Our Honorable Prime Minister, Mr. Narendra Modi Ji, announced the demonetization of the 500 and 1000rs notes. The notes were ruled invalid at midnight on November 8, 16th.

People may have their notes altered by depositing them at a bank until December 30th, according to the authorities.

The maximum amount that may be changed at one time is Rs 4000, however it was lowered to Rs 2000 a week later. Similarly, withdrawals are restricted; one may only withdraw up to rs10,000 each day. The farmer’s situation was unique; they could take Rs 25000 in a week to repay their debt.

With the rising of the sun, everyone rushes to the bank to convert their currency, which takes a long time. The rate of crime decreases as a result of the demonetization process. Due of a cash deficit, the ATM stopped functioning. Every person was having difficulty purchasing any goods.

The Benefits of Demonetisation

As a result of the installation, corruption is reduced. The crime rate drops dramatically.

The goal of demonetization was admirable. There was a decrease in black money to a larger degree. The terrorist group has been disrupted, and crime has decreased.

If you have any additional questions regarding Essay On Demonetisation, please post them in the comments section below.

What is demonetisation essay in English?

A: Demonetization is the process of removing a certain type of currency, such as banknotes or coins, from circulation.

What is the main objective of demonetisation?

A: Demonetisation is the act of decreasing the number of coins in circulation. The aim is to reduce inflation and stimulate economic activity by discouraging hoarding of money.

What are the advantages of demonetisation?

A: Demonetisation is a process of removing bank money from an economy. This can either be because the government decides to do this, or because its part of a business decision by banks such as JP Morgan Chase. It has many advantages for those in need of cash, including that there are no fees involved and users dont have to worry about taxes on their funds like they would with other methods. However, demonetisation also poses its own set of challenges for example making it harder for small businesses who rely on hard currency transactions due to increased competition

Essay On FDI For Students In Easy Words – Read Here