The five-star defensive tackle from the Elite 11, Lebbeus Overton has been a hot commodity for some time. With his commitment to Coach Fisher at Texas A&M Saturday, he is now part of one of the most decorated recruiting classes in college football history.

5-star Lebbeus Overton was the latest addition to Jimbo Fisher’s recruiting class, who is now at 11 commits. 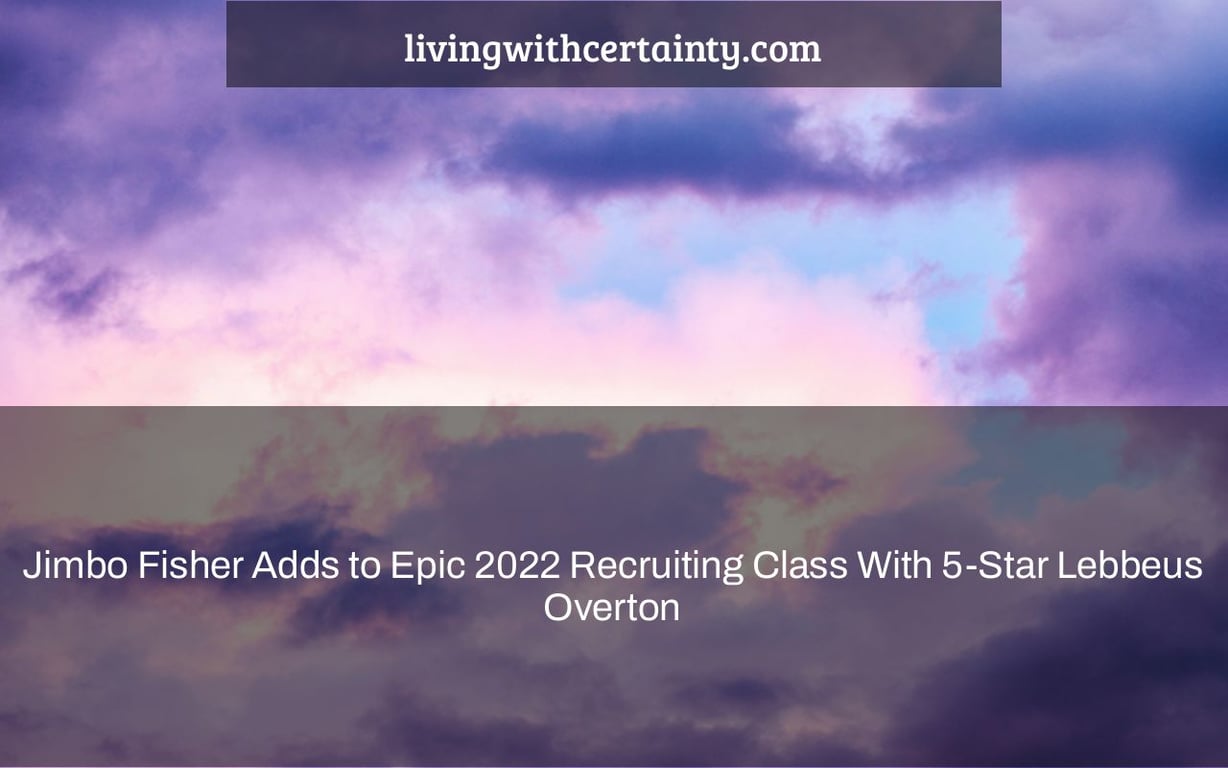 Jimbo Fisher and his staff have put together an excellent 2022 recruiting class for the Texas A&M Aggies, and now it’s getting even better with the commitment of 5-star defensive lineman Lebbeus Overton.

Overton is one of the top 2022 recruits in the nation, and he’s set to join a recruiting class that is historically epic for Texas A&M.

The Texas A&M Aggies have an elite 2022 recruiting class

Head coach Jimbo Fisher of the Texas A&M Aggies looks on during the first half of the spring game at Kyle Field. The Aggies have added the massive commitment of 5-star DL Lebbeus Overton to their 2022 class | Carmen Mandato/Getty Images)

Fisher and the Aggies had a difficult assignment in securing Overton’s pledge, as he was one of the most sought-after prospects in the 2022 class.

Overton was initially a 2023 recruit, but he found a way to graduate early and was reclassified to the 2022 class as a result.

Overton’s commitment serves as a cherry on top for the Aggies, who already had the No. 1 2022 recruiting class in the nation, according to 247Sports. Much of the class is already either signed or enrolled, and it was already going to be a massive haul of talent for Texas A&M.

Fisher and his staff had not only secured the commitments of 29 additional players, but they also had a star-studded class.

Three more 5-stars, defensive lineman Walter Nolen and Shemar Stewart, and wide receiver Chris Marshall, have signed but have yet to enroll.

According to the 247Sports Composite, Nolen was rated as the No. 2 overall prospect in the 2022 class. He’s as good a defensive line prospect as you’ll find, at 6-foot-4 and 325 pounds as an incoming freshman. Stewart, who is 6-foot-6 and 272 pounds and was regarded as the ninth-best recruit in the country, is not to be outdone.

For the Aggies, Lebbeus Overton brings a lot to the table.

“I will be announcing my commitment at Texas A&M University” Overton said during a ceremony at his high school, according to Sports Illustrated. “First academics, then building relationships with coaches…building trust. A&M had all of those.”

Overton, who stands almost 6-foot-5 and weighs 265 pounds, has the physique to develop into a larger defender, but he’s already big enough to hold his own in the college football trenches.

Even in a state recognized for producing NFL talent on a regular basis, Overton was frighteningly talented as a high school football player. He looked like an NFL defensive end playing under the lights on Friday night, displaying the speed, size, and agility that has made fellow Georgia native Travon Walker such a desirable prospect in the 2022 NFL Draft. It’s worth mentioning that Walker is listed as a 6-foot-5, 275-pound NFL prospect, which explains why Overton was such a sought-after recruit by clubs all around the country.

Overton chose the Aggies over the four other colleges in his top five: Georgia, Ohio State, Oklahoma, and Oregon, despite receiving almost 30 offers.

It’s impressive enough that Fisher and Overton’s lead recruiter, Texas A&M defensive tackles coach Elijah Robinson, was able to pull Overton out of Georgia. With the Bulldogs fresh off a national championship and aforementioned players like Travon Walker and Jordan Davis getting major NFL love, it would have made sense for the big defensive end to stay in the state.

It’s worth mentioning, though, that the 5-star recruit’s hometown wasn’t always Alpharetta, Georgia. He was born in College Station, and both of his parents worked in the Aggies’ sports administration, according to Steve Wiltfong of 247Sports.

Overton told Wiltfong, “It’s exciting.” “I like having the best connection with their coaches and getting the feel with the guys, seeing the folks in the organization and seeing how the players are and the defensive system they run.”

“Going back to my hometown and being a part of it is also a nice experience.”

When it comes to defensive strategies, the Aggies are on track to have one of the greatest defenses in college football once this class of 2022 is fully integrated and earning playing time.

With the signing of Overton, the Aggies will have four 5-star defensive lineman on their roster, with an average height and weight of 6-foot-4, 285 pounds… as freshmen.

Stewart, a 5-star defensive lineman from Opa Locka, Florida, explained it to 247Sports earlier this year:

“I believe we have the ability to be the greatest in the country, particularly in the front four.” I don’t believe anybody will be able to stop us if everything comes together and we work together as a team.”

What could it possibly be if not a jab at Alabama and Georgia?

The Aggies are bolstering their roster in preparation for a drive to the top of the SEC and collegiate football mountain, and Overton is expected to play a key role.

Pinned apps not showing in Windows 11? Apply these fixes